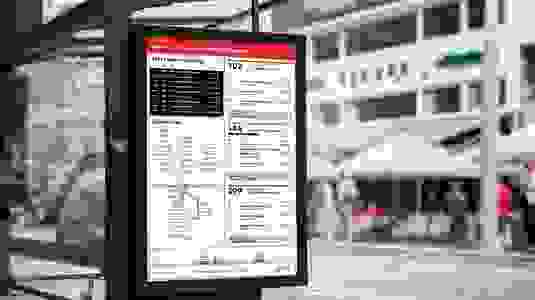 Many people say that digital signage is a necessity for businesses, but there are few discussions about how digital signage can actually affect consumer behavior. However, Kinetic Panel’s research is refreshing, because it reveals important message that are most closely related to the business: consumers!

How does digital signage affect consumers? Kinetic Panel’s study involves 1000 consumers what they expect when they see an outdoor digital signage display. Nearly one-fifth (19%) of respondents said they wanted to know more about the product, service or advertising experience.

Interestingly, 23% of young people downloaded mobile apps after watching outdoor digital signage ads, compared to one out of 10 adults. As a result, the younger generation tends to use digital posters more.

Another 38% said the digital signage should have a transmission update function, which was increased to 50% in the 55-64-year-old study participants.

In addition, 29% said they wanted to see more interactive search-and-navigate solutions in public places, while 32% said feature updates were more productive and 30% said information about local events would help their trip.

Digital signage, which features specific location information, can help users relate to them, thereby enhancing consumer interaction between brand loyalty and the older population. About One-fourth of respondents said they could provide battery-charging ports for mobile devices in order to make the most of their digital signage.

This may be beneficial to advertisers, as it may prolong the consumer’s stay time.

The research further suggests that direct retail services are an opportunity to maximize the potential of digital posters, especially when you consider that one-tenth of those surveyed said they would be shopping directly from a digital signage display.

In fact, nearly one-third of the 25-34-year-old expect to be able to buy directly from the digital signage system in the future.

What does lcd advertising display bring to new retail?